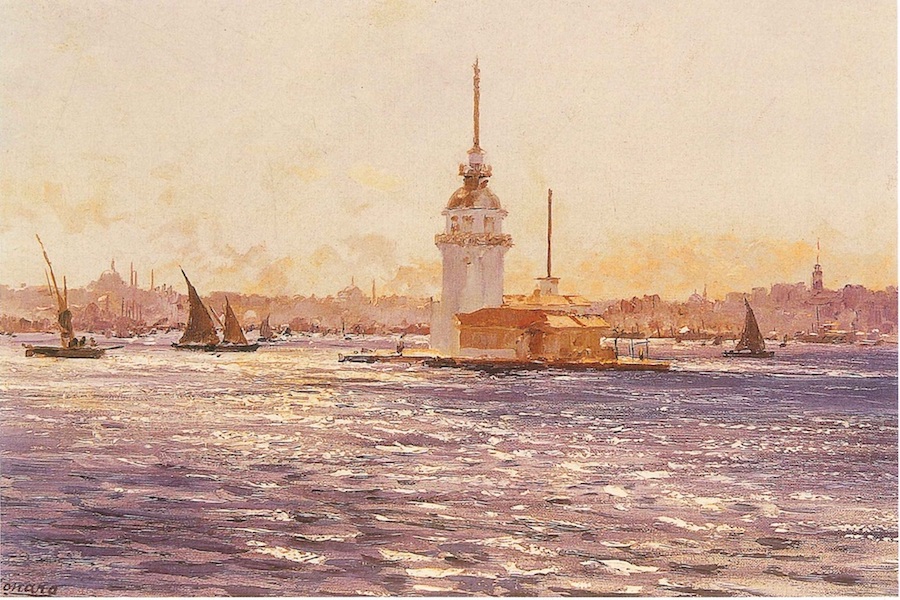 “ ‘Signori, Scutari!’ All the eyes were turned to the Asiatic shore. There lay Scutari, the golden city, stretching out of sight over the tops and sides of her hills, veiled in the luminous morning mists, smiling and fresh as if created by the touch of a magic wand. Who can express that spectacle? The language that serves to describe our cities would give no idea of that immense variety of color and of prospect, of that wondrous confusion of city and of country, of gay, austere, European, Oriental, fanciful, charming and grand!”

This famous, mystical Constantinople description the Italian travel writer Edmondo de Amicis pinned into the world literature in 1878 have undoubtedly dragged many adventurers  into the city since then. One of them was Fausto Zonaro of Padua, Venice. (1891) The shades of the European sky were too pale for his eyes and palette, which craved for more light. His luck was not that good, either. When his debts were piled up, he eventually decided to take a chance in the East. People laughed at him “Turks and art?”

Nevertheless, the queen of the cities, was generous with him. So were its inhabitants. He won everyone’s heart with his modesty, sincerity and dedication except his fellow men, whose jealousy he could not help but whined about. Zonaro, well aware of the generosity the city gifted him, witnessed the pinnacle of his career here.  Yet, he owed us nothing at all. His gift to us was his talent that came alive under the skies of this luminous city: more than a thousand paintings washed in light in “the city that was meant to be painted”. He was grateful enough to remember the generosity and friendships in his memoirs he penned before passing away. We were to wait for it to be published for more than 80 years: 20 years under the reign of Hamid.

What color is the East?

Like Gerome, Preziosi, Ziem, Zonaro was infatuated with the Orient, which arises from a troubled sense of curiosity. Yet, in his paintings, we never get to see slave markets, wild eroticism, or unacceptable mistakes most Orientalists slipped into. Instead, we watch 19th century Istanbul in a moving picture- a city in a constant festive mood. Turks’ Feast of Sacrifice, Jews’s Pesah, Greeks’ Baklahorani, and Armenians’ Easter were some of the festivals he rushed  to capture joie de vivre. The city was an epitome of cosmopolitan world long before the word cosmopolitan appeared. Firemen, dervishes, street barbers, petition writers, fishermen, gypsies spill over his canvas. Of course, it did not take long to gain the recognition of first the foreign diplomatic circles and then the Ottoman ruling class. Commissions for portraits  and landscapes followed one another. Private tutorial demands did not seem to cease. Eventually, one day, the Ottoman Sultan would notice his shimmering cityscapes.

His Majesty the Sultan

Having witnessed the parade heading to the Yıldız Palace for Friday prayer on the Galata bridge, Zonaro, like everyone else, was captivated by Sultan Hamid’s meticulously selected Turkish soldiers from Söğütlü. Long weeks of arduous sketching and painting of “Ertuğrul Cavalry on the bridge” earned him the title of Chief Artist to the Ottoman Court. For the next 13 years he carried this title, he was well aware that he represented the Ottoman Sultan that was eager to keep abreast of the arts and culture in the rest of the world. (1896-1909) His paintings enriched the royal collection or were delivered as gifts to Sultan’s guests; he painted the portraits of Hamid and his children and his works were recognized by numerous badges of honor.

Upon Sultan’s commission for the 1897 Greek-Turkish war which erupted on the issue of Crete, he somehow forgot that his country was allies with Greeks and readied for the war zone with his paints and canvas. The set was actually ready for him on the grounds of Yıldız Palace. Hamid asked what he wanted in return for the completion of his painting, called The Assault. To his ears, it sounded as magical as Aladdin’s question. What Zonaro had in mind was the spacious, luminous apartment in Akaretler. Hamid being not less mighty than Aladdin granted Zonaro’s wish on the very same day he made the request.

The studio and the gallery at Akaretler

The key to the 3-story concrete apartment in Beşiktaş district on the southern end of the Bosphorus was not only home to his family he made with the photographer Elisa Pante. He also gave private tutorials to art students here who were eager to make the most out of what Zonaro Hoca offered as a teacher, which in a way was an effort to offset the shortcomings of the recently established Fine Arts Academy. These passionate art students did not only consist of male students; there were female students among them as well, some of whom were Mihri Hanım and Celile Hanım, who would be later known as the mother of Nazım Hikmet, the great poet of Turkish literature. As for Mihri Hanım, she would be the co-founder of the Fine Arts Academy for Girls one day.

Apart from the studio, he designed four of the rooms in his Akaretler apartment as a gallery, which we might call one of the first private galleries in the city, displaying many of his old and new paintings temporarily. Over the years, it became an exhibition hall, which visitors were curious about what to expect every time they visited.

Until 1909, the year Sultan Hamid was exiled to Thessaloniki, his insatiable craving to paint the city he made home never seemed to be quenched; he rushed around from one side of the city to the other without turning down countless coffees he was served. Unless he had private tutorials, he would rent a boat, sail around the Golden Horn or the Bosphorus. If the light and the landscape were good enough, he would pick his paints and stool and engage in his work until he got hungry. When he took a break, he sipped his mastika watching ships pass by, nibbled on his beans and fish in one of the Galata taverns, which Istanbulites enjoyed frequenting. He was an Istanbulite, indeed!

The declaration of Constitutional Monarchy (1908) was soon followed by the mutiny of 31 March, which ended Hamid’s reign. The turmoil in the city witnessed the plunder of Yıldız Palace, upon which Zonaro commented as such: “How can one loot their home?” Hamid’s exile to Thessaloniki, unfortunately, marked the end of his career as a court painter. Having fallen from grace, he had to leave for Italy heart-broken with 46 chests of paintings as heavy as 6 tonnes. Just like one of his Constantinopolitan ancestors, Komnenos period historian Giovanni Zonaro, he left his blueprint on the city. Is this truly a farewell? “Whoever drinks from Taksim’s water will visit Istanbul again”, he wrote this again and again in his memoirs. So, who knows one day the Zonaro family may end up in this city again. 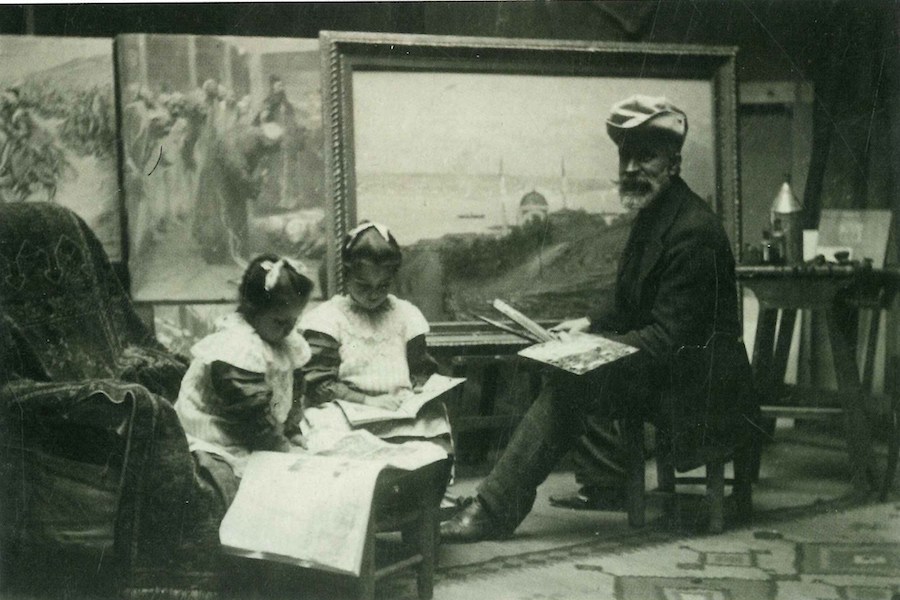 Fausto Zonaro, 20 years under the reign of Abdülhamid: the memoirs and works of Fausto Zonaro