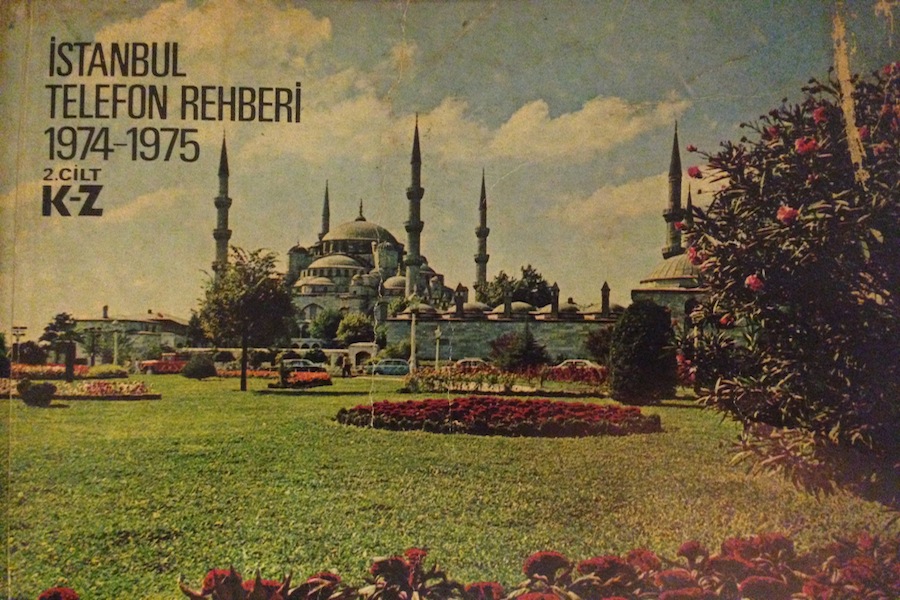 Libraries never fail to inspire me… SALT research library is definitely one of them. The amazing find of the week was Istanbul city  telephone directories. I remember amusing myself with  those bulky phone books when I was a kid.  Maybe I was just practicing  my   mother tongue  by saying words out loudly, but I admit now it must have been nerve-wracking for my mum.

When I picked them  up  this time, I was fascinated by the graphic design of the period, which,  of course,  I never got to recognize it  back then. I  realized  that many  companies  dropped out of the business while  some have managed to survive times and tides. Here is a bunch of  my  picks…

Below is the Süleymaniye complex perching on the third hill of the city. 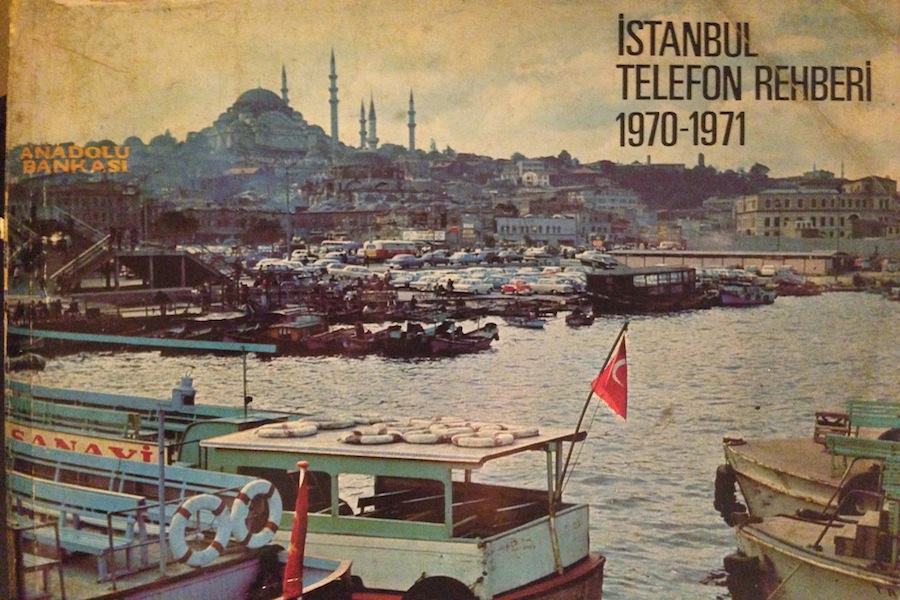 On the cover of another directory is the Bosphorus bridge. This suspension bridge connecting Asia and Europe was completed in 1973. After the completion of a second  bridge, we now refer to it as the first bridge. The third one is on its way at the expense of losing the northern forests -the lungs of the city. Its construction was fiercely opposed by the environmentalists and the locals. Nevertheless, the protests turned out to be a vain effort. One of its legs is now  unfortunately  standing in Poyrazköy, a village with a bay that once  held  a white flag for its clean waters. 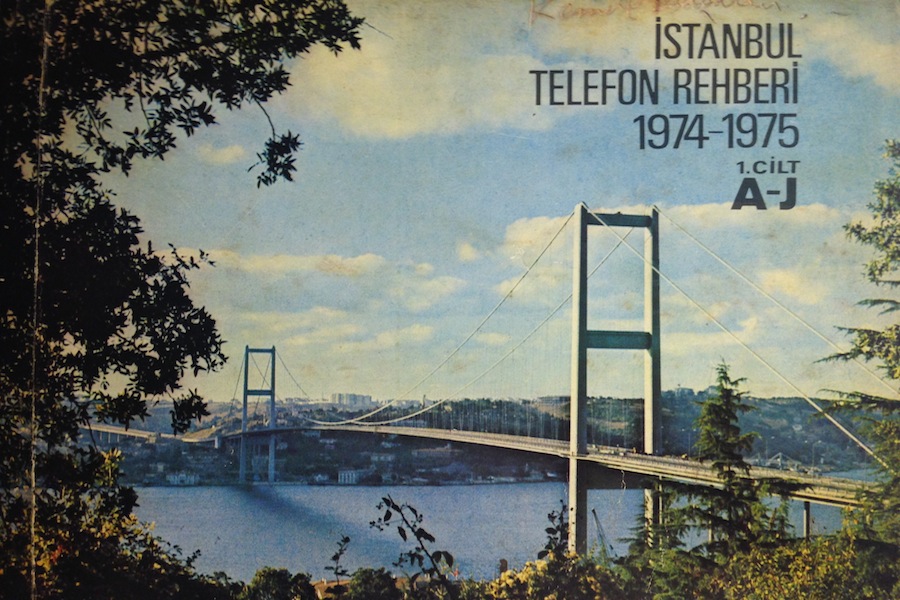 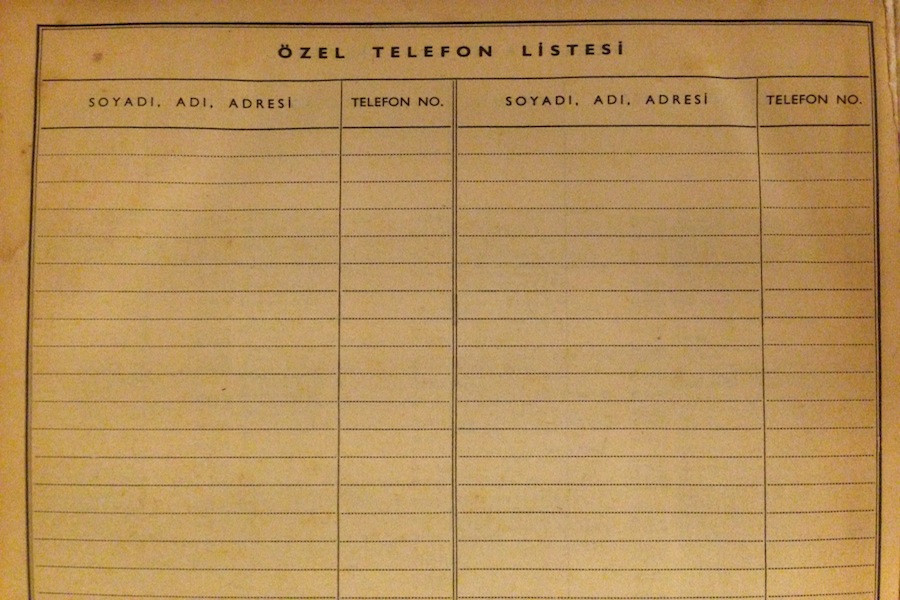 Kurukahveci Mehmet Efendi Mahdumları coffee brand and shop still ranks towards the top of itinerary list every tourist who visits the city. Yet, this does not mean it is not a local favourite since late 19th century. The logo nothing short of Metropolis, the German expressionist sci-fi by Fritz Lang still adorns the paper coffee packages and boxes. If you are around the Spice Market, do not get worried about how to spot its location; one long queue will take you to the shop! Taksim Municipal Leisure center was a handsome modernist building by the distinguished architect Rüknettin Güney, a building which I never got to see but  heard a lot about  in  my childhood. It used to be on the east  side  of Taksim Gezi Park. The park, which you probably have heard  of  during the Gezi Park protests in  the summer  of  2013. In its heydays, the venue proudly hosted concerts by world-wide stars such as Dalida and Charles Aznavour before it was closed down in the  late  60s only to give room to the construction of an international chain hotel.

Baylan, one of the oldest patisseries of old Pera

Baylan is still in the business so you can  taste Cup Griye of the legendary sweet shop. Cup Griye -the sweet with ice-cream, whipped cream and honey-almond and caramel sauce- has remained their specialty and  a  classic since the day it was created on the premises. Old fashioned  sweet shops are disappearing one by one so do not miss the opportunity when in the city. The Kadıköy branch is my favorite one! 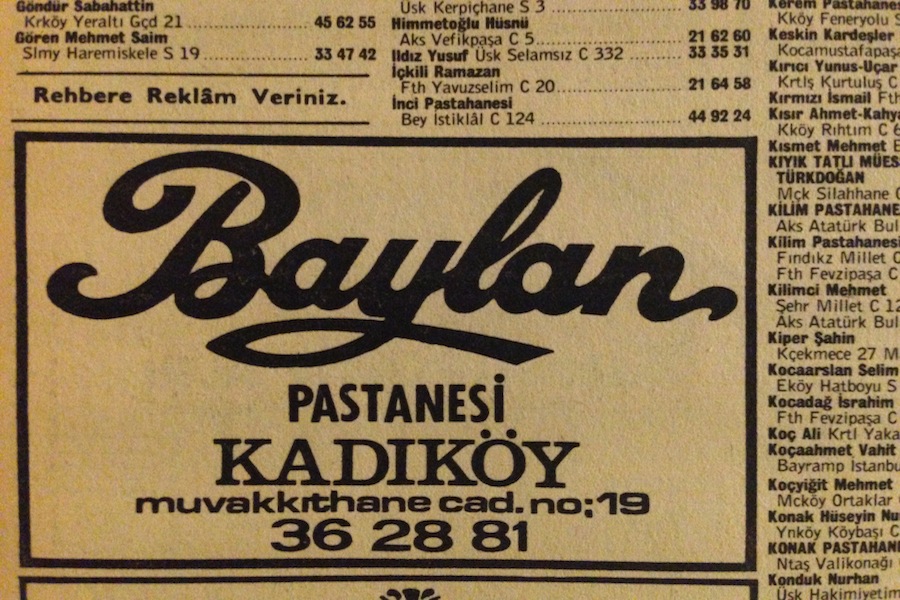 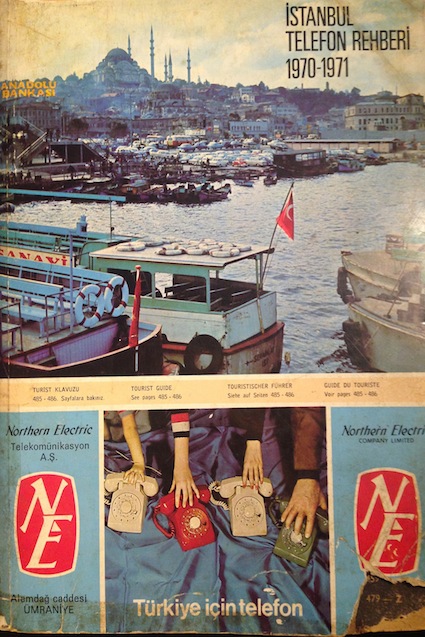 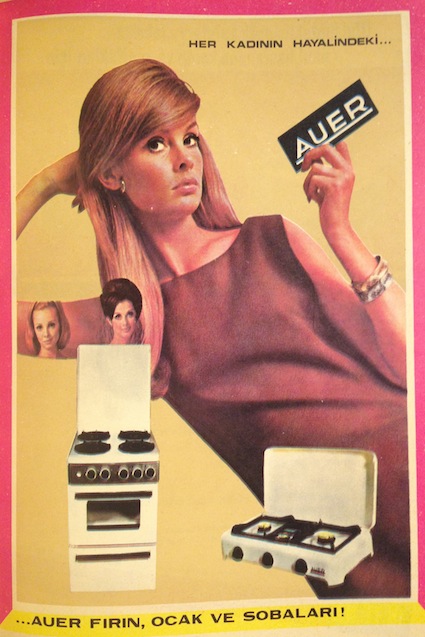 Both Görgülü Patisserie and Koska sweet shop are still in the business. I can never have enough of Görgülü’s  chocolate-framboise cake. And Koska Helvacısı, with its sinful flavors, has made a big name in confectionary since the early 19th century. Among its traditional delicacies are helva, tahin (sesame  seed  paste), pekmez (molasses), hard candies, and Turkish delight. I am sure there is something for your sweet tooth! 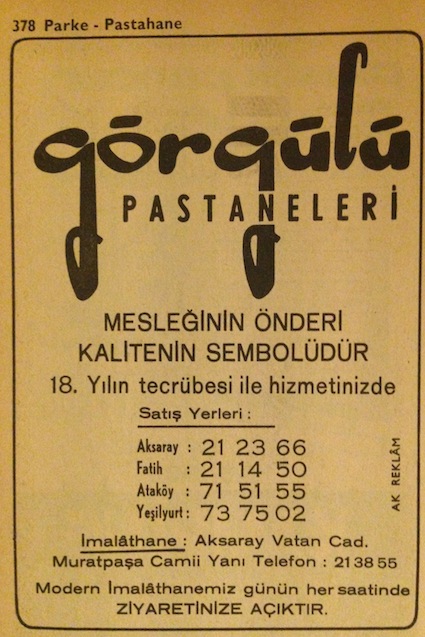 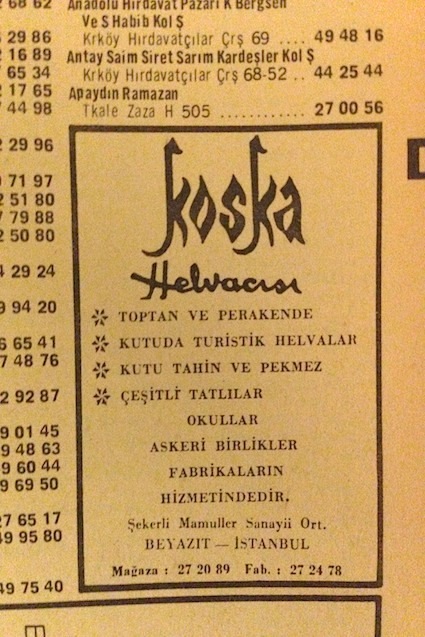 Etiquette on how to talk on the phone: “Talking sweetly on the phone has immense benefits!”

Kavaklıdere winery, the first private sector wine producer, ranks among the finest brands  in the country. 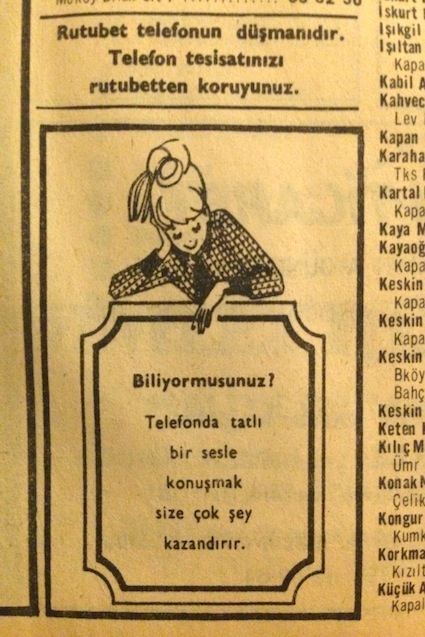 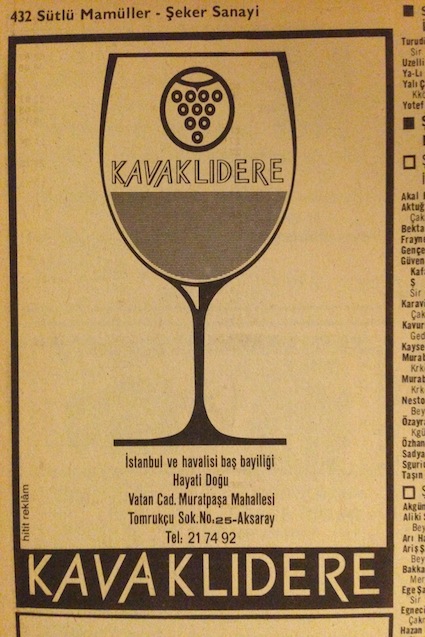 Kent, Turkish chewing gum brand, created  this nerdy character Tipitip when it first came out in the mid 70s…  I watched the commercial years later and I admit it looks a bit creepy now. Yet, this chewing gum will spark the childhood memories of those grew up in the 70s and 80s. No longer available for it was sold to a British company.

IGS- once the leading Turkish company in garment industry

IGS was the pioneer of the ready-made garment industry in Turkey. Still in the industry. 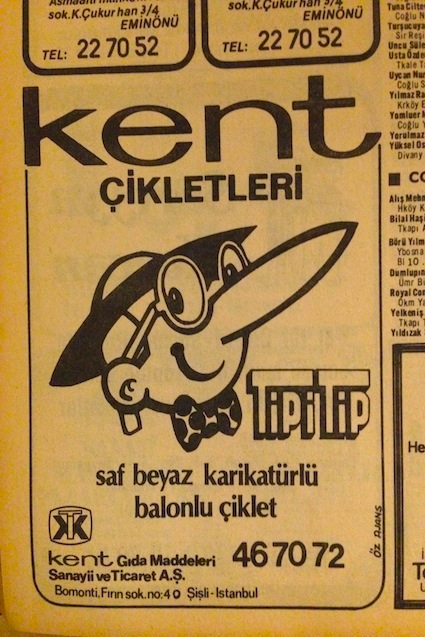 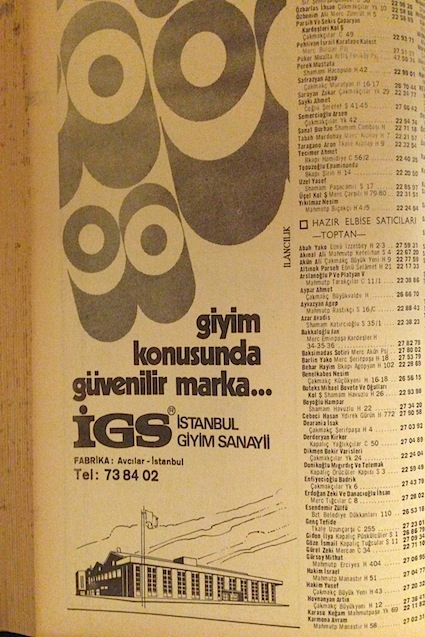 Using a Turkish name- Murat 124, Fiat aimed to attract Turkish customers when it launched its production line in Turkey in the 70s. A common boys name, Murat and the design of the car itself appealed to the Turkish consumers and made a success. Especially its  advertising campaign  made a breakthrough in Turkish advertising. Though the production is over decades ago, you can still come across Murat  cars  in Istanbul.

And Kemal Özkan… the dreadful surgeon for every muslim boy in Istanbul, who has to go  through circumcision  at one point in their lives. Surgical removal of the foreskin from the penis as a religious rite of passage in Islam left me traumatized even though it was my brother who went through the process. Kemal Özkan was the most famous of all in the city. 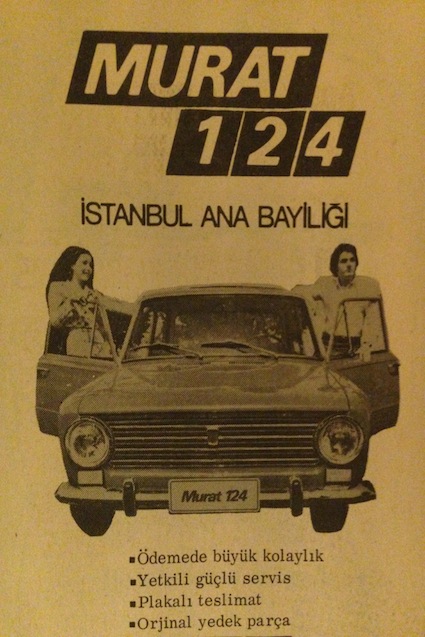 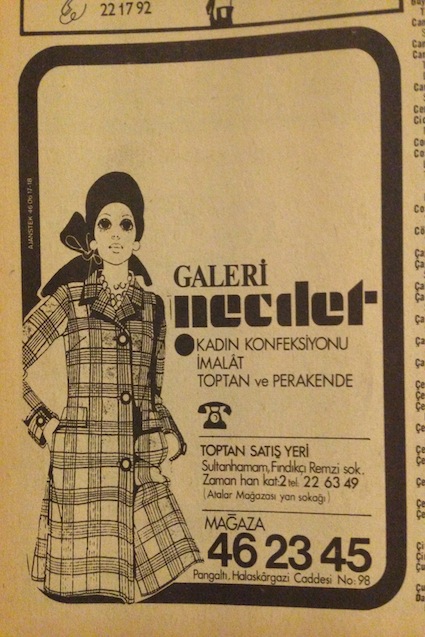